Updates Make It Easier to Review and Troubleshoot Order Runs

User feedback on the new Order Run Details page prompted some enhancements in the display of order run and node data to reduce scrolling and facilitate review.

The Node Details sidebar now has expandable sections and a link to pre-filtered logs.

This release introduces user notifications displayed on the Login page and accessible from the top toolbar of the web app interface. [DEV-6728]

Look in these locations for the following types of messages.

A new icon opens the Notifications list from the web app toolbar.

An update to the Alerts feature introduces a test warning alert and refreshes the order run time exceeded alert. These alerts can be configured for an entire kitchen or at the recipe level, but each requires thresholds to be set in variations.

Configure the new alerts on the Configure Kitchen page (shown), during kitchen creation, or on the Recipes page.

Set alert thresholds from variation actions on the Recipes page (shown) or from a tab on the Variation page.

Note that versions 1.1.180 and 1.1.181 were deployed to DataKitchen testing environments only.

As the DataKitchen web app refresh project advances, the Orders page gets an update! The redesign consolidates the data displayed and adds new columns that list the user who created the order and the order's schedule status. [DEV-3028]

Kitchen Merge Gets a Makeover

View file changes and resolve conflicts in a three-panel view.

Open a sidebar with a summary of changes in the source kitchen.

Revert Kitchen enables users to rollback any kitchen to its previous state. It can revert kitchen merges—with or without merge conflict resolutions—or single updates. Previously released only as a command line option, this release introduces the function in the web app on the Kitchen History page. [DEV-6454]

The Revert kitchen link appears in the upper right corner of the Kitchen History page.

Use Revert Kitchen with Caution!

Note that the Revert Kitchen feature to rollback previous updates and merges can be dangerous! The revert should be used only with extreme caution!

A DataKitchen Agent allocates resources in memory and disk space for running recipe orders. An agent must be online and have sufficient resources for any order to run. The web app provides an Agent Status widget, accessed from the top menu bar, that informs users of its current state.

Now that same information is available when users click to run a variation or node! This release adds a section to the Run Variation and Run Node dialogs, so users can assess the resources for processing their orders. If an agent is offline or being checked for its status, the Run button is not active and the order cannot initiate. See Agents & Resources for more information. [DEV-6799]

Users can run a variation when the agent is online.

Users cannot run a variation when the agent is offline.

The changes here result in Run Variation buttons being available at all times, even when an agent may not be ready to support an order run. While this scenario is rare, an order could fail with no useful feedback as to the cause. DataKitchen developers continue to work on agent-related features, and a coming release will address this gap, providing robust health checks and user messaging.

Note that version 1.1.177 was deployed to DataKitchen testing environments only.

The Order Run Details page depicts a graph as it is being processed. When the page displays in the Node Status graph mode, each node is shown in a color to indicate its processing status. This release includes enhanced status indicators using both colors and icons, as well as tooltips, to differentiate states and follow user accessibility guidelines.

Node status indicators include icons and tooltips. Note the legend in this image.

A platform enhancement in this release provides File Editor users access to the Add Node module. Previously only available in the Nodes tab of the Recipes page and the Graph tab of the Variation page, this module now also opens as a dialog within the File Editor.

After adding a node, users must click the Update button to save the new node files. Note that users still have to connect newly added nodes in their graphs, either directly in the graph-setting-list object within the variations.json file, or by returning to the graphical view. [DEV-4716]

Users can now access the Add Node function from the File Editor.

The Add Node dialog opens in the File Editor.

By removing several configuration fields and providing direct access to the underlying ingredient variation, DataKitchen designers and developers have offered an easier path for users to employ ingredients in their recipes.

The Ingredient tab summarizes and links to the ingredient variation.

The Tests tab mirrors the standard test settings for other node types.

The latest web app update incorporates user feedback into the redesign of the Create Kitchen Wizard! The new process includes the following features.

See a preview of the new wizard below, and see Create a Kitchen for more information. [DEV-3038]

The redesigned wizard offers a search field for recipe selection.

The DataKitchen platform has added another new input/output connector that can serve as a data source and data sink. Now, users can configure their recipe nodes to connect to their Azure Data Lake Storage Gen2 (ADLS2) instances. [DEV-6264, DEV-6265]

This field has been renamed with an underscore character for all Azure data sources and sinks.
connection-string
IS NOW
connection_string
Users with existing Azure Blob Storage recipes must update this property.

The DataKitchen platform has added another new input/output connector that can serve as a data source and data sink. Now, users can configure their recipe nodes to connect to their Teradata instances. [DEV-6260, DEV-6259]

This release introduces two new commands in the DataKitchen command line interface, DKCloudCommand. The kitchen-history and kitchen-revert commands are both associated with improvements to kitchen merge operations across the platform. Together, they provide a process for rolling back the results of a kitchen merge to prevent bad code from affecting production environments.

Similar to the Kitchen History page in the web app, the output of the kitchen-history (kh) command shows the record of kitchen updates, or Git commits, associated with a kitchen's Git branch. When users revert a kitchen merge, the history report is vital for confirming the outcome. See Kitchen History and Commands & Options for more information.

The new kitchen-revert command and its shortcut kr enable users to rollback any kitchen to its previous state. It can revert kitchen merges—with or without merge conflict resolutions—or single updates. See Revert Merges and Commands & Options for more information. [DEV-6455]

The Report Issue form that opens from this menu is working properly.

The DataKitchen web app updates continue with a refresh of the Recipes page! The new design eliminates the Configure Recipe page, making most functions accessible on the Recipes page.

Users can now manage variations, nodes, graphs, variable sets (base variables and overrides), alerts, and schedules from a single page. See Recipes and Use the Recipes Page for more information. [DEV-4569]

wrench icon (A): opened the Configure Recipe page with Description and Variations tabs.

Recipe page (As): most recipe configurations are accessible right on this page. Recipe Description is editable inline; Edit Alerts opens a dialog for recipe-level alerts; the Variable Sets tab allows adding and editing base and override variable sets; the Schedules tab lists all schedules and the variations that use them.

File View (B): this option in the Recipe Actions drop-down list opens the File Editor.

Note that the first variation listed in the image above is marked with a diamond icon, indicating that it is enabled to be used as a recipe ingredient.

Ingredient settings were removed from recipe configurations but remain in a tab on each Variation page.

The new Schedules tab offers actions to add and edit schedules across variations that use them.

As part of an ongoing infrastructure update to the DataKitchen platform, the Order Run Details page has received a makeover!

The page has a new layout that consolidates access to most data in a toolbar. Other improvements also address usability.

Previously, users who logged in to the DataKitchen platform user interface had a maximum of four hours to work before their user sessions would automatically end. This session timeout occurred regardless of any user activity. As a result, users were in danger of losing the work they were doing in building recipes.

With this release, DataKitchen shortens the UI session length but restarts the session clock with user activity. Users will now be logged out after 2 hours and 10 minutes of inactivity. Work in progress is not saved. See User Sessions for more information. [DEV-4614, DEV-6335]

Change to When Graph Nodes are Processed

Traditionally, the DataKitchen platform processes graph nodes level by level. For simple graphs, this order of operations works fine. In parallel graphs, however, processing level-by-level means that one "path" of the graph has to wait until another path catches up in node levels before it can complete its execution.

This release offers a change the order of execution to achieve more efficient throughput in recipe workflows. The platform can now process a node as soon as its predecessor completes its execution.

The new sequential graph processing is turned off by default but can be turned on by request.

See the Graph topic and, specifically, the Order of Execution section for more information. [DEV-6154]

Nodes do not process until all nodes in the previous level are complete.

A node begins processing when the previous node in the same path completes.

With the new sequential method, node_e and node_g can be processed while node_d is still in progress.

A recent enhancement allowed users to choose among default images or upload custom images to represent their container nodes. With this release, the platform offers more than 35 Docker-based images in the default drop-down list. See Manage Container Icons for more information. [DEV-5874]

The platform expands the number of default container node icons.

Generally, the default resource allocations for an order are sufficient. The defaults are 1024 MB memory and 2048 MB disk space.

Users Can Select or Add Custom Icons for Container Nodes
DataKitchen DataOps Platform WebApp users who are adding or editing container nodes to their recipe variations, can now select from a list of available icons to represent their container nodes.

Previously, the platform only offered a generic Docker "whale" icon, but with this release users can choose among other default images or upload their own custom images. More default images will be added in a future release. See Manage Container Icons for more information. [DEV-5164, DEV-5872]

New Delete Kitchen Dialog
This release offers a refresh of the Delete Kitchen wizard! The multi-step wizard has been replaced with a single confirmation dialog that contains all relevant settings. See Delete a Kitchen for more information. [DEV-3376]

Reminder: When you delete a kitchen, you delete all configurations, orders, and secrets associated with that kitchen. The delete action cannot be undone. 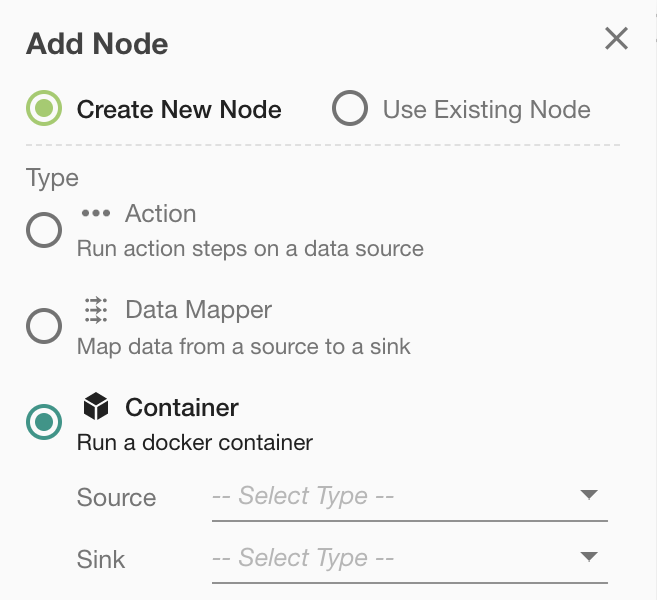 At this time, the notes from previous releases are available as internal DataKitchen resources only.